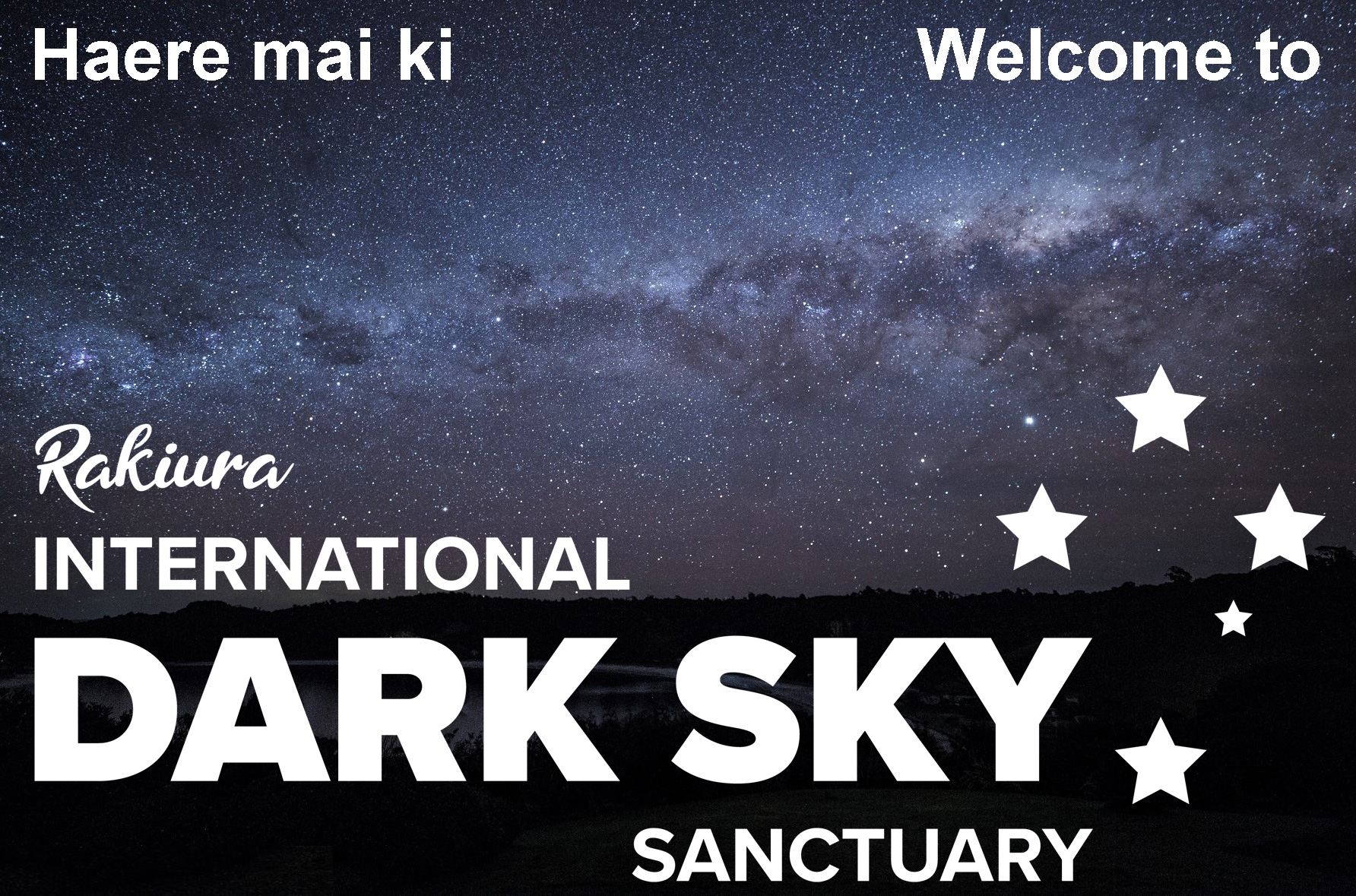 Take a moment to stop and look up.

Deep into the Milky Way and its billions of stars.

Stewart Island/Rakiura is the southern-most Dark Sky Sanctuary in the world and offers one of the darkest locations to view the night sky.

Thanks largely to the lack of light pollution that many urban areas are faced with, our starry nights offer an unforgettable experience.

Stewart Island is located just off the southern tip of New Zealand's South Island, a short hop away from Invercargill or Bluff by plane or ferry.

On 3rd January 2019 Stewart Island/Rakiura was awarded Dark Sky Sanctuary accreditation by the International Dark Sky Association (IDA).  Classified by the IDA as having outstanding sky quality - and being accredited with Sanctuary status - helps to ensure that light pollution levels are controlled and our natural nightscape is protected for the future.

85% of Stewart Island is protected as Rakiura National Park.  Our community values the environment, both landscape and nightscape, not just for our own enjoyment and health and wellbeing, but for our visitors too. 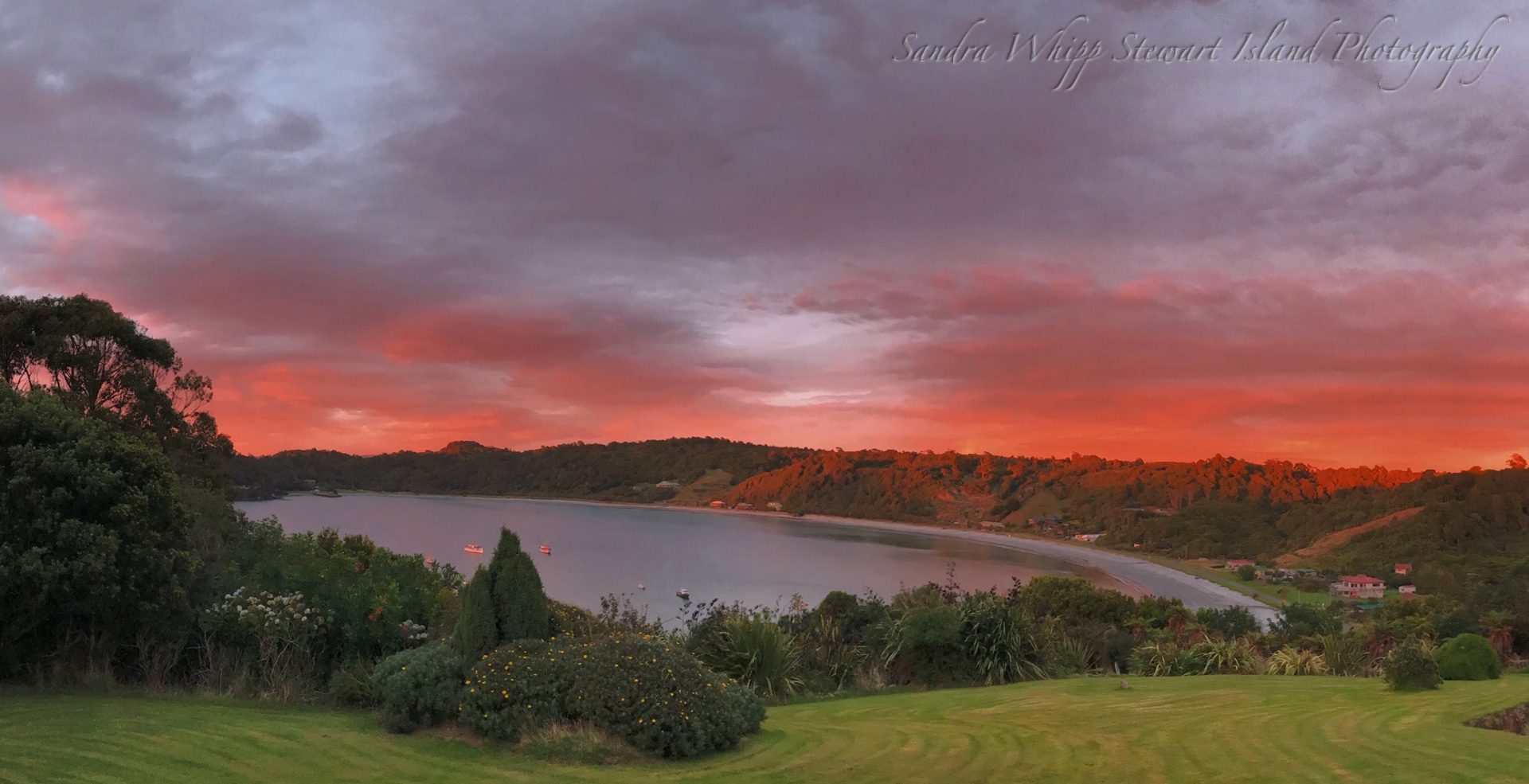 Te Punga o Te Waka a Maui, the original Maori name, positions Stewart Island firmly at the heart of Maori mythology. Translated as "The Anchor Stone of Maui's Canoe", it refers to the part played by this Island in the legend of Maui and his crew, who from their canoe (the South Island) caught and raised the great fish, (the North Island).

The more commonly known and used name however is Rakiura. Translated as "The great and deep blushing of Te Rakitamau" an early Maori Chief, seen today as the glowing sunrises, sunsets and the Aurora Australis or Southern Lights.

Please do not copy, distribute or use these images in any way unless you obtain permission to do so. 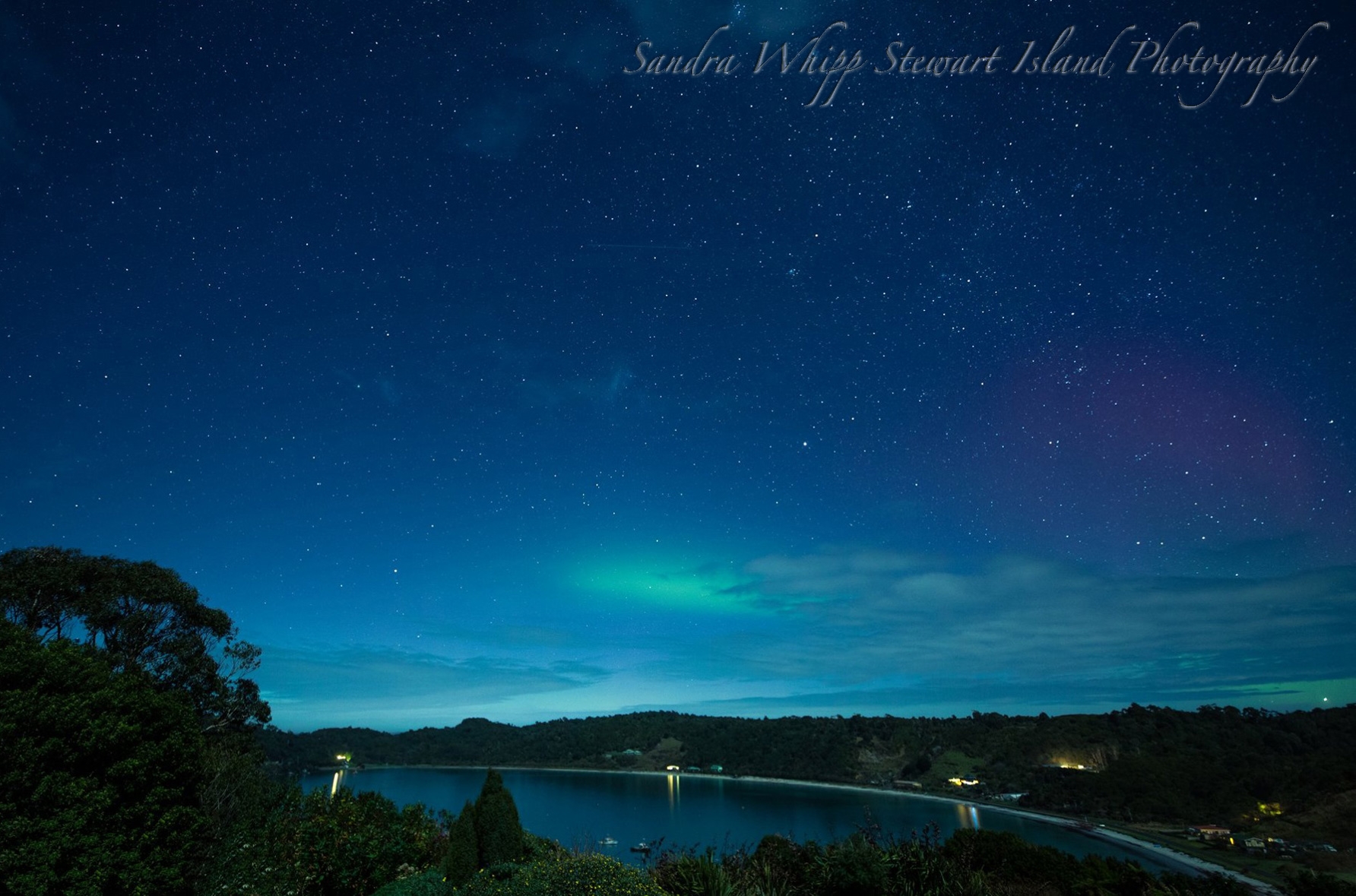 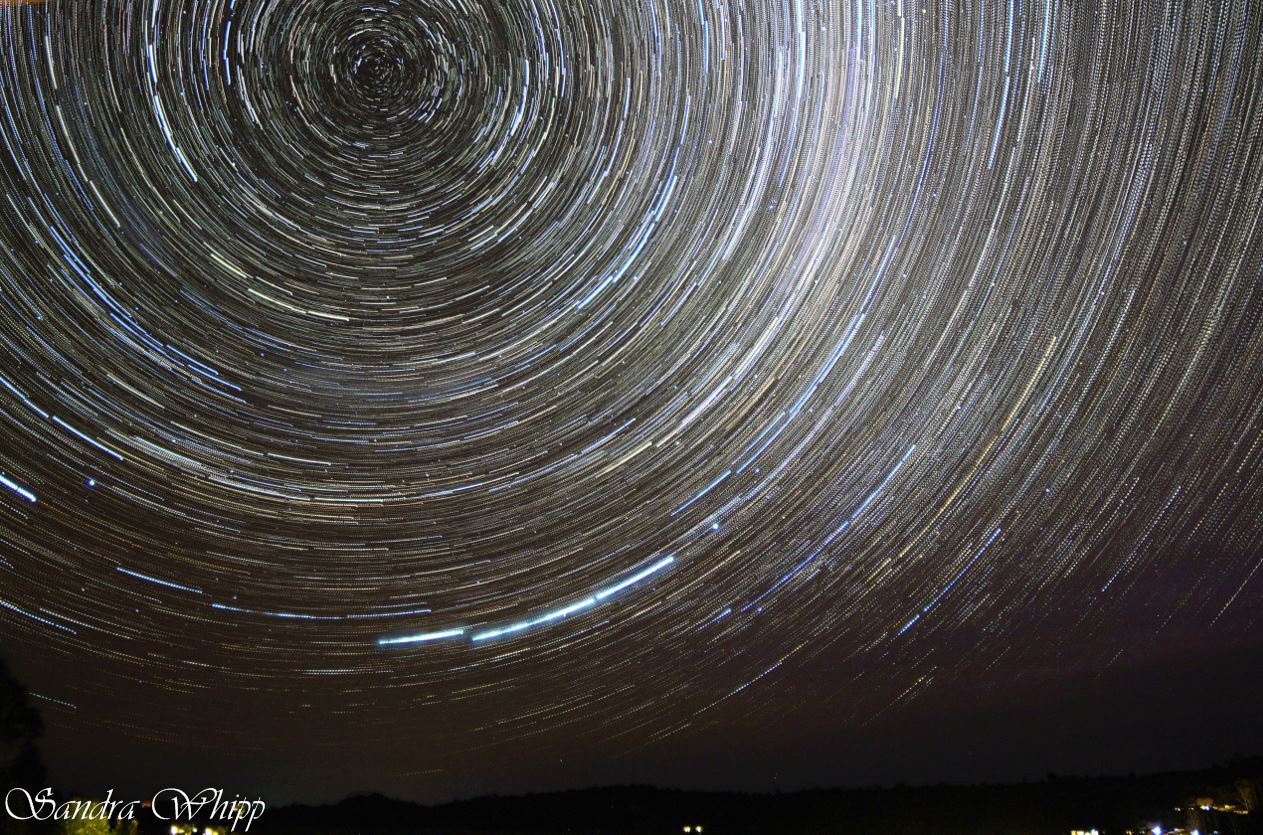 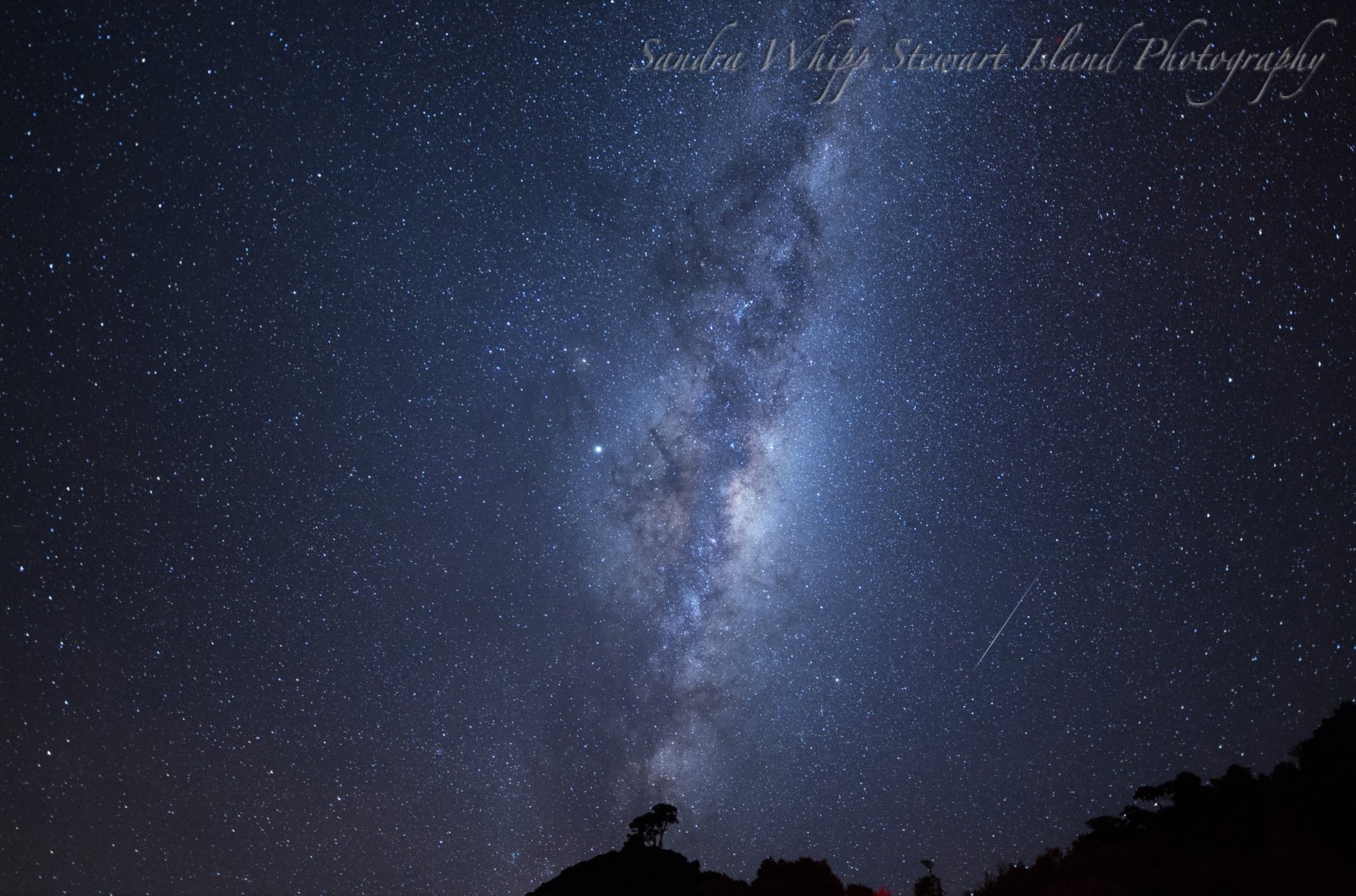 "Stewart Island/Rakiura’s pristine night skies are a rare treasure and through the sanctuary’s enacted policies the area will remain a resource in a world where access to the night sky is becoming increasingly scarce."

How dark is the sky at Stewart Island/Rakiura?

We measure the quality of our night sky at 8 locations at least once a year using a Unihedron Sky Quality Meter (SQM).  The meter converts the amount of light into units of magnitudes per square arc-second.  A meter reading of 21.00 indicates a very dark sky while a reading of 16.00 would indicate a light-polluted sky.  Since 2017 our sky quality meter readings have been between 21.51 and 21.93 mac/arc sec2.

Want to become a citizen scientist?  If you have a smart phone, download a 'dark sky meter' app which uses the camera on your phone to obtain a sky darkness measurement.  Data can be submitted to the Globe At Night citizen science project.  Give it a try!

Long term monitoring of light pollution conditions around the world can be viewed on the Globe at Night website.

What time of year should I visit Stewart Island/Rakiura to see the night sky?

Our night skies offer an unforgettable experience all year round but we recommend a winter visit.

In the southern hemisphere winter is June, July & August and it's dark between the hours of 7.00pm - 6.30am.

During summer (December, January & February) it's dark enough for sky watching between midnight - 3.00am!

Once I get to Stewart Island/Rakiura, where can I view the night sky?

How do I get to Stewart Island/Rakiura?

What is light pollution and who is ALAN?

What's the difference between a Dark Sky Sanctuary and a Dark Sky Reserve?

Once I get to Stewart Island/Rakiura, where can I view the night sky?

Anywhere that you have a clear view of the sky away from artificial lighting/outdoor lights.

*Please respect the privacy of homeowners in these areas*

How do I get to Stewart Island/Rakiura?

Transport options to Stewart Island are either by ferry or flight.

It's important to note that the right weather conditions are required to see aurora, regardless of a promising forecast of KP4 or more!  If it's too cloudy you won't see aurora, and sometimes aurora are forecast during daylight hours, so again not visible.

Aurora activity is not guaranteed ... please adjust your expectations accordingly and enjoy our starry nights, regardless!

Auroras are the result of collisions between gaseous particles (in the Earth’s atmosphere) with charged particles (released from the sun’s atmosphere).  Because the phenomena occurs near the magnetic poles, getting as close to these poles as possible will rapidly increase the chances of viewing aurora. As the geomagnetic south pole is in Antarctica, there is quite vast distances to the nearest populated landmass (Australia/New Zealand), so the southern lights generally have to be quite strong (kp4+) to be seen from populated areas.

In terms of what physically makes a place good to view aurora aside from the proximity to the magnetic poles. The most important point is ‘light pollution’, it will ruin any aurora show, so the best places to watch the auroras should be away from light pollution and you need a clear view to the south.  At latitude 47 degrees south Stewart Island/Rakiura provides an excellent vantage point.

Our eyes aren't always able to detect the colours of aurora - you may see the ribbons of light moving but a DSLR camera will pick up the colours.

The Aurora Service website has tips on how to photograph aurora.  Apps are available for some smart phones that alter camera settings but you need a steady hand!

A variety of smart phone apps are available that forecast the likelihood of aurora activity or visit the Aurora Service website.

Auroras are the result of collisions between gaseous particles (in the Earth’s atmosphere) with charged particles (released from the sun’s atmosphere).  Because the phenomena occurs near the magnetic poles, getting as close to these poles as possible will rapidly increase the chances of viewing aurora. As the geomagnetic south pole is in Antarctica, there is quite vast distances to the nearest populated landmass (Australia/New Zealand), so the southern lights generally have to be quite strong (kp4+) to be seen from populated areas.

Variations in colour are due to the type of gas particles that are colliding. The most common aurora colour which is green, is produced by oxygen molecules located about 60 miles above the earth. The rarer red auroras are produced by high-altitude oxygen, at heights of up to 200 miles. Nitrogen produces blue or purple aurora. 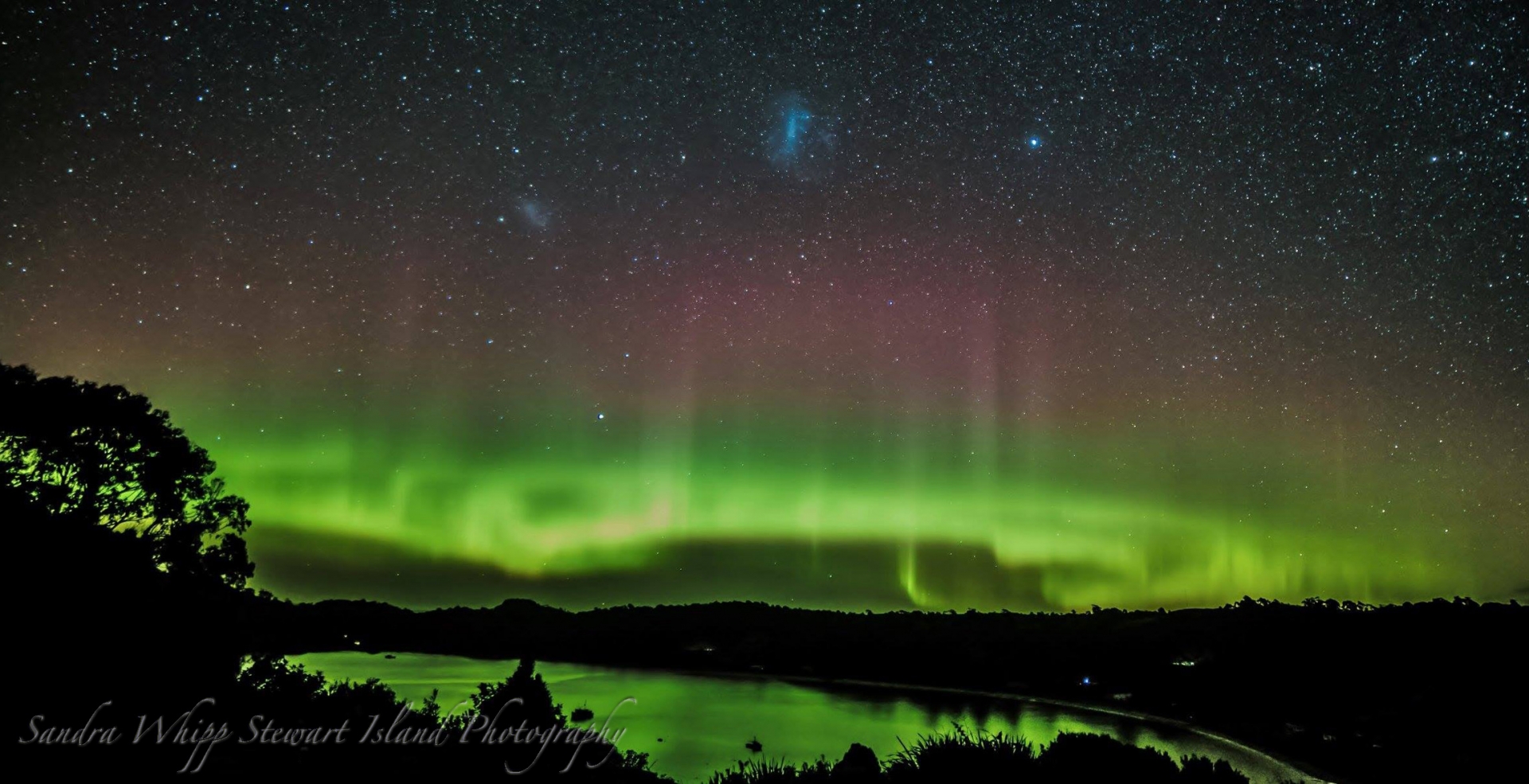 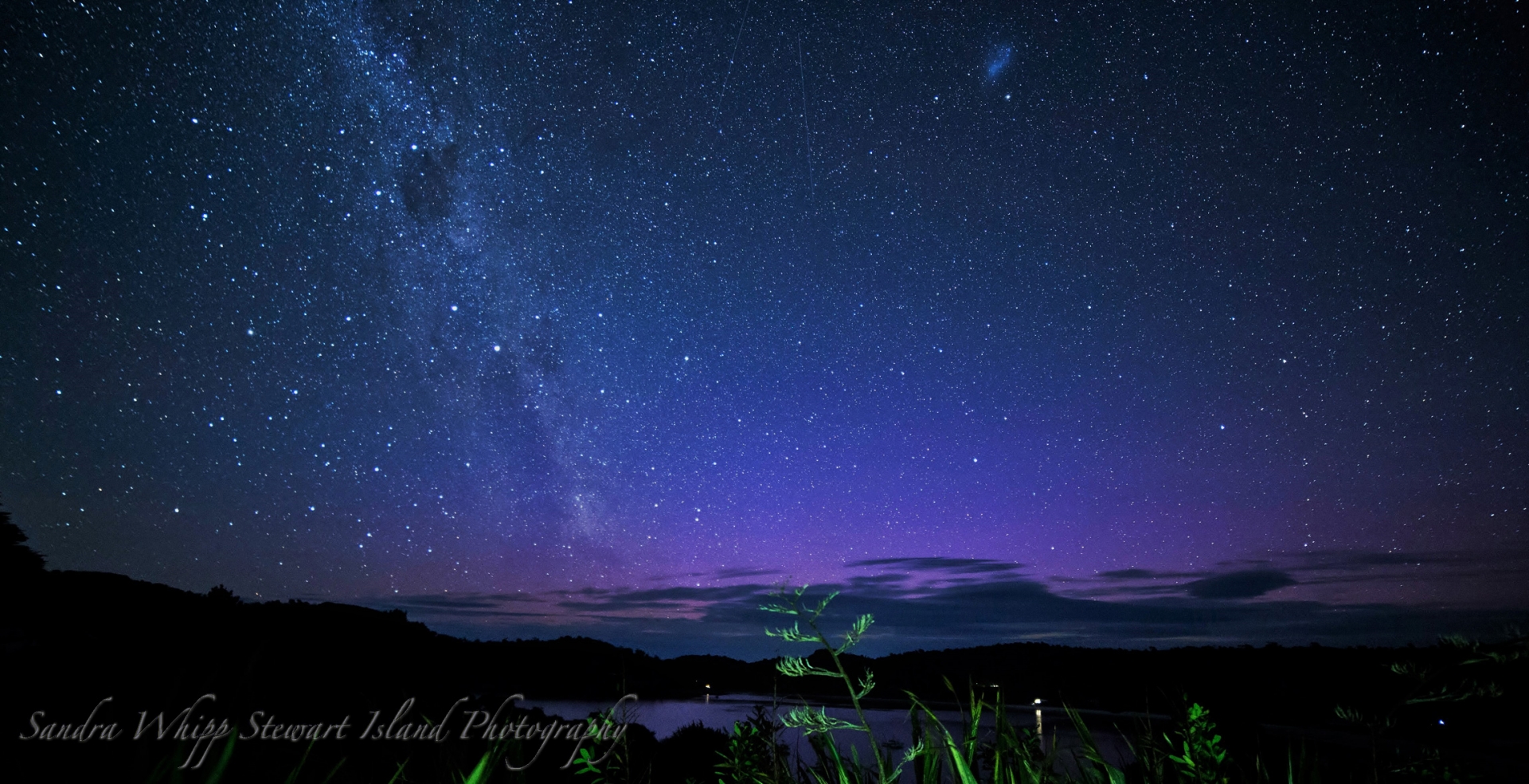 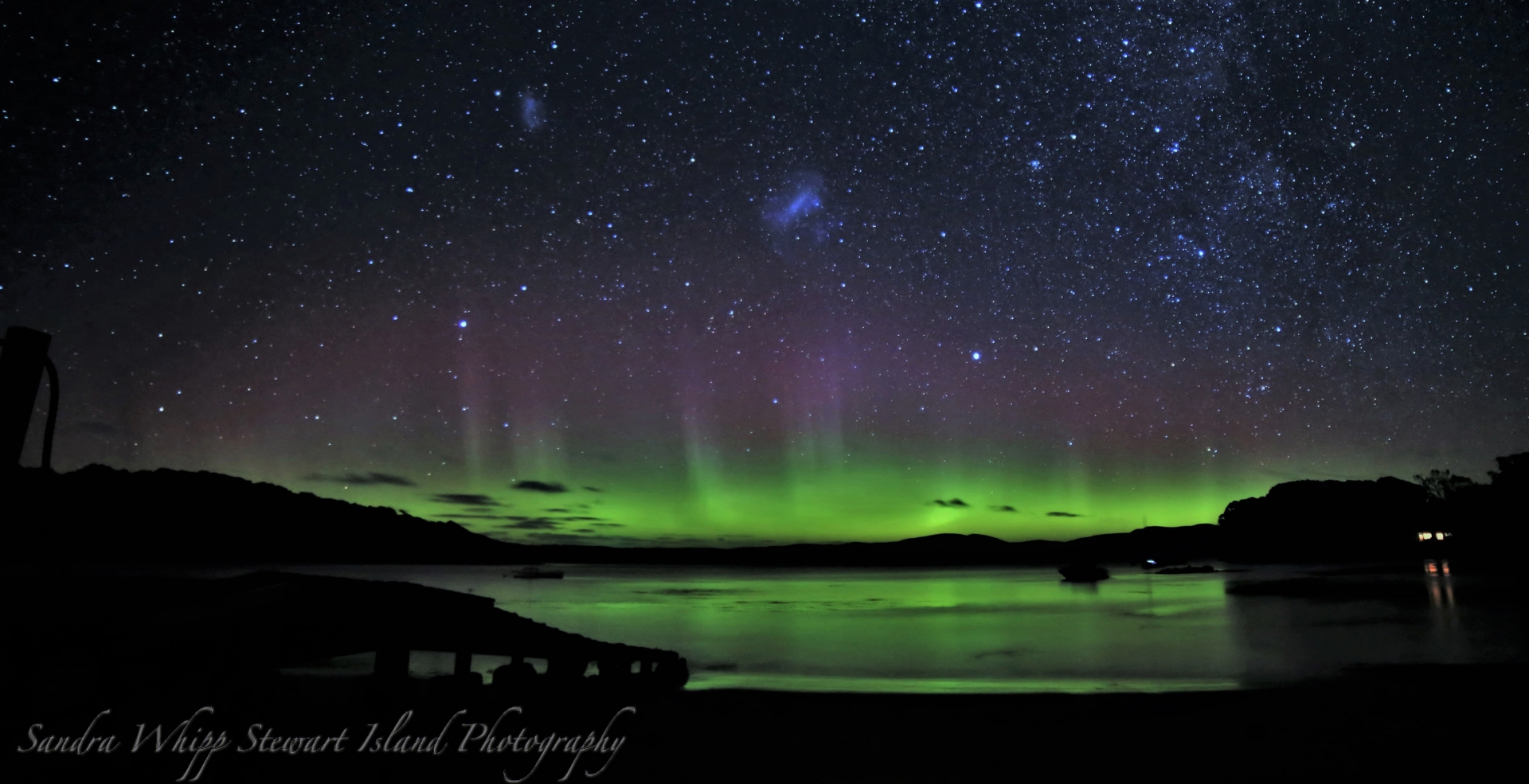 Generally, it is when there is an opening in the suns atmosphere that allows electrons and protons to flow out. In terms of auroras, we need quite a lot of charged particles colliding with earth’s atmosphere to create vivid displays, so this usually requires quite a large opening, such as a coronal hole, or a sunspot. The connection between Auroras and sunspot activity has been suspected since about 1880. Thanks to research conducted since the 1950′s, we now know that electrons and protons from the sun are blown towards the earth on the ‘solar wind’.

The lights of the Aurora generally extend from 80 kilometres (50 miles) to as high as 640 kilometres (400 miles) above the earth’s surface.

CREDIT: Sandra Whipp Photography for images of Stewart Island/Rakiura skies and Aurora Service for the above information.

What is light pollution and who is ALAN?!

The inappropriate or excessive use of artificial light – known as light pollution – can have serious environmental consequences for humans, wildlife, and our climate. Components of light pollution include:

A.L.A.N is Artificial Light At Night and you may come across this acronym when researching light pollution.

Save the night ... it's as easy as changing a light bulb ... to a warm-coloured or filtered/shielded light bulb!

What's the difference between a Dark Sky Sanctuary and a Dark Sky Reserve? 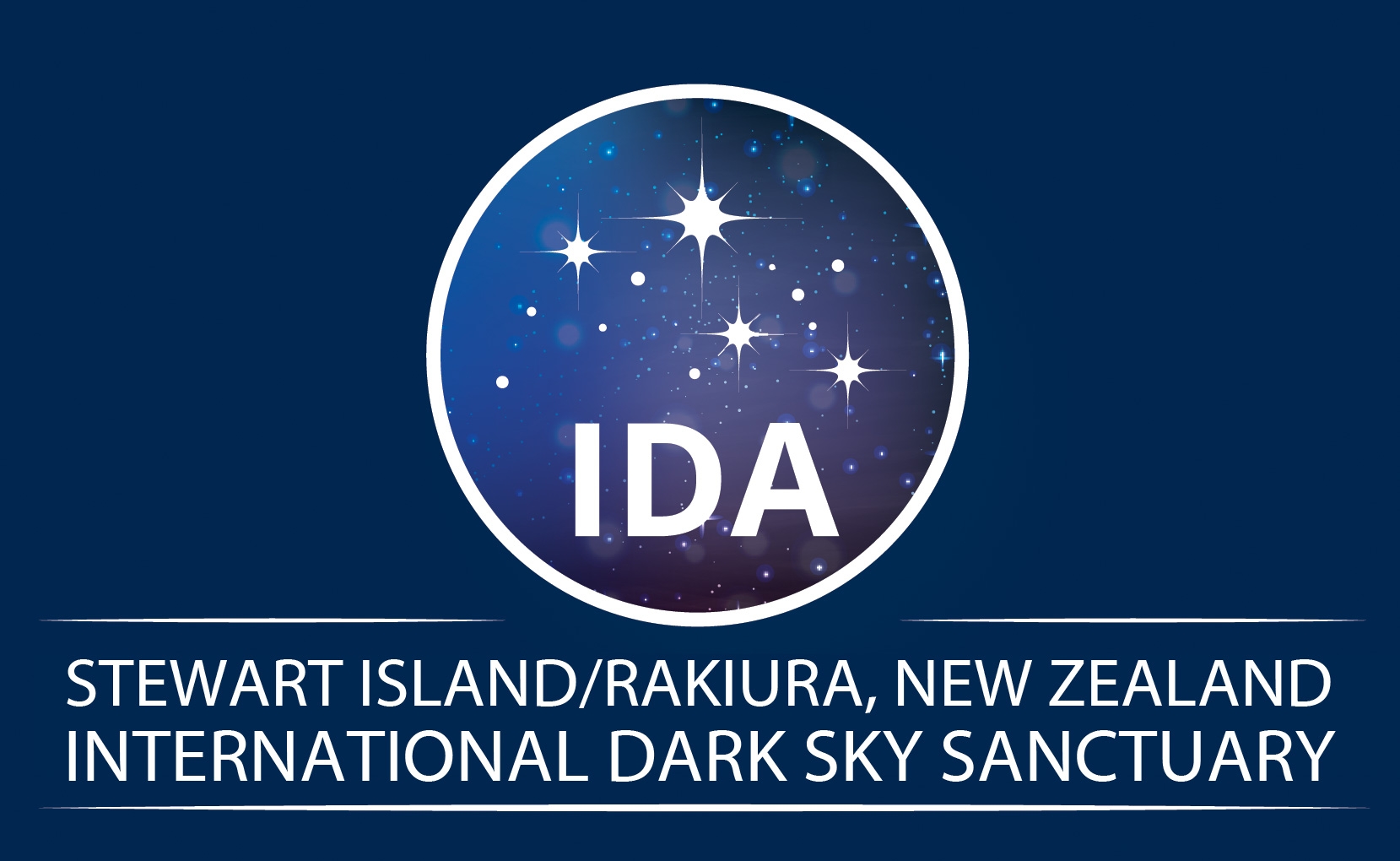 An IDA Dark Sky Sanctuary is public or private land that has an exceptional or distinguished quality of starry nights and a nocturnal environment that is protected for its scientific, natural, or educational value, its cultural heritage and/or public enjoyment.  A sanctuary differs from a Dark Sky Park or Reserve in that it is typically situated in a very remote location with few (if any) nearby threats to the quality of its dark night skies and it does not otherwise meet the requirements for designation as a park or reserve.  Read more about the five designations of "dark sky places" on the IDA website

AstroNZ supplies quality telescopes and accessories to keen amateurs. Owned by the Auckland Astronomical Society their mission is to promote astronomy in New Zealand by providing quality equipment at a reasonable price.

Southland Astronomical Society is a small but active group of amateur astronomers based in Invercargill at the southern tip of New Zealand's South Island.

The Australasian Dark Sky Alliance is an independent non-profit charity formed to educate the public and policymakers about night environment conservation.